7 years. My last medal in a quadruple scull was also in bronze and it was in Beijing at the Olympic Games. But my last international medal was 3 years ago in double scull. Once more...a bronze medal. It feels like I am back where I left things. But let's go back 3 days ago.

This weekend was not a normal week-end of racing for me. Not only was it my first time in a quadruple scull for year but it was the first time I was racing since my back surgery. I can tell you that when we backed up in the start pontoon, I had to calm down and breathe to make sure that I was able to keep my thoughts under control. For the first time in my life my hands were shaking at a start of a race. I knew I wanted to be here. I have worked so hard that for nothing else I would trade my seat. But I was just in the unknown. I tried to think of our training sessions back in Canada where we dug quite deep. So I should have had the confidence to know that my body would be fine. But I could not help it. It is one thing to train. Another to race and give your everything if needed. The light turned green and all dark thoughts vanished. I was back in my element. Racing. 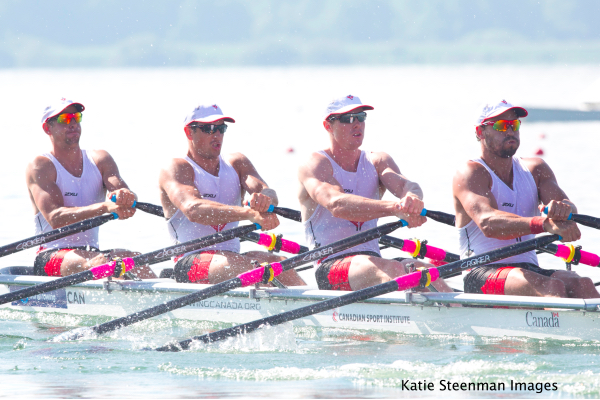 We started this World Cup exactly the way we were asked to. We found out that we were able to play with the best crews of this event. Finishing 2nd behind the British after a neck-a-neck race, we had to go through the repechage but we gained confidence in our ability to get some good speed for a 2k. We won our repechage against Poland and therefore got our ticket for the "big final" on Sunday afternoon. Instructions were clear. Strong middle 1000m. I felt so confident in our capacity to start really fast. What we do at training is pretty impressive so I knew it was possible. Indeed, we led for almost three quarter of the race before being run over by Great Britain and Germany in the last strokes of the race. Really happy with the bronze and somehow a bit frustrated that we did not manage to counter attack those two boats in the final sprint. I have not often had the opportunity to lead a race this way at a world level. Experience is definitely a key component in those last strokes of a race. We have been rowing together for a few weeks only. We left Varese with a clearer idea on where we stand at the moment. There is always some work to do and we know that we can do it.

Next stop will be Rotterdam (The Netherlands) for the Holland Beker next weekend. We will race the quadruple scull on Saturday and the eight on Sunday. Why the eight? Because we will race Panamerican Games in Toronto mid July in this event (as well as in the quad). I am really excited to race the eight in Canada. There is such a legacy in the country with a great number of gold medals at world championships and the Olympic Games. I am proud to be part of that story with some of the London 2012 veterans on board!