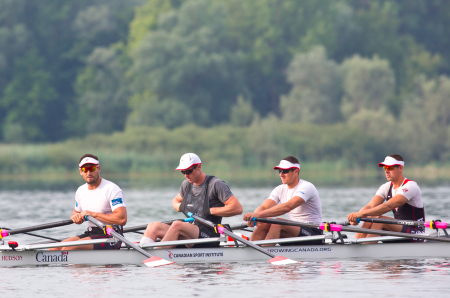 It has been a week that we arrived in Italy. The 9 hours jetlag was not too bad to deal with despite a tough training program. We have kept the rhythm with 2 to 3 sessions per day. World Cup 2 is part of a process not our goal number 1. Nevertheless, it feels good to be back on a racing course, to get that adrenaline flow while rowing down the course.
So I am back in the quad. Last time was Beijing 2008. But first of all, I would like to introduce my crewmates. 4 seats but 5 guys. Injury is a risk (as I found out!) so it is not a bad thing to switch and know how to row in any situation.

1m94 /101kg.
Position in the boat: Stroke seat
A University of Washington Alumni, Rob is the elder of our team (I am two months younger !). He won all the official single races this season and won a silver medal in London 2012. Best Performance holder in the men's eight and several times medallist on world stages, he never gives up as I had the opportunity to see a few weeks ago on his 2k erg while passing out after pulling a an impressive 5min43.
His detailed profile

If you ever meet Will, don't be surprised to see him walking around with some food in his hands. That is his number one hobby : eat well and healthy. This organic and true food lover is actually a warrior. His story could be a great synopsis for a movie. He used to play basketball when he tried to erg in his parents garage. He was 17 when he set the best Canadian performance as a junior. He had never rowed before! Impossible is nothing for "Deaner" and we have a lot of other stories. As an undergraduate of Cal Berkeley in English, I can improve everyday thanks to him.
His detailed profile

Matt is our soldier because he actually is a soldier. He started rowing at Ryerson University in Ontario where he is from. Matt is currently learning French and he like to test himself with me. He is a metronome and he will make sure that every session is accomplished the way it should be. He steers and calls in the boat...so we are well driven.
His detailed profile

1m90 / 88kg
Position in the boat : substitute and single sculler
He is our Quebec boy! When I first met Pascal three years ago in Quebec, he couldn't stop talking about how he was going to race me in Rio 2016. He was rowing for 2 months! I have to be honest: I laughed. But he is a hard and dedicated worker and he surprised me when 2 years later he was at the start of World Championships in a quad. His nickname is "junkyard dog" because he doesn't give up and he will fight until the end. He will race in the single scull in Varese against the "big dogs"!
His detailed profile

Our quad is getting better and better after every session. We don't have a lot of kilometres together as I only jumped back in the boat three weeks ago. Speed is going very well and everything we have done so far has been very motivating. We have a lot of horsepower under the hood, I am looking forward to seeing what we can do with it. It is hard to say how we are doing compared to others. 2008 quadrennial and Beijing are quite far away. New teammates, new position in the boat for me, 7 years later,...all the ingredients are here to write a new page to the book.
This 2nd World Cup will be a great opportunity to see where we are at against highly experienced boats such as the British (Silver at Worlds last year) and the Germans (2012 Olympic Champion). 12 entries and some crazy races coming up.
You can follow the races on www.worldrowing.com as usual. Live video on Sunday.