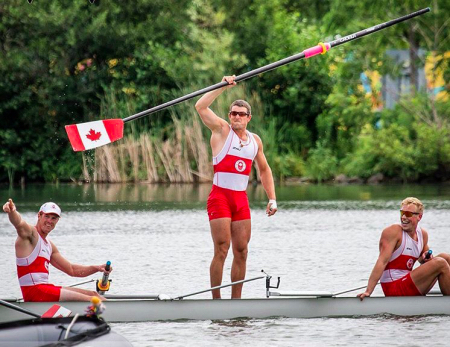 We left Toronto with a lot of hardware in our luggage and tons of good memories. What an incredible experience to race at home. I understand a lot more why teams competing at their own Games, like in London 2012, are boosted by the crowd. This is an incredible feeling to enter the last 500m and to hear the crowd roaring. It gave me goose bumps. It all started with the opening ceremony. We had the opportunity to go to Toronto on July 10th and march along with 500 Team Canada athletes and coaches. What a feeling to enter the stadium as the host country.

So much fun and so much pride. The flipside of the ceremony for us is that the rowing venue was far away from downtown Toronto and most of us were rowing the next day. It is a lot of waiting, standing, sweating, driving,...for a 10 minutes walk in the end. We didn’t have the chance to watch the beautiful show produced by Cirque du Soleil as we straight away walked towards the bus shuttle to our rowing village. I would not do that for the Olympic Games if I were racing the next day but it was a great and unique experience to it once for the Pan-American Games.

Back to sport now. I entered the Men’s Quad and the Men’s Eight. We won the first one on Tuesday 14th. Mixed feeling as we crossed the line first. We didn’t have the race we expected to row. We had a great first 1000m. I am really impressed with the speed we can develop. Rough conditions in the 2nd half didn’t allow us to take off against a solid Cuban quad. A few mistakes on our side made it hard to stay relaxed. Happy to win in front of a packed grandstand cheering for us. But not completely satisfied of our race. Crew debrief still to come. 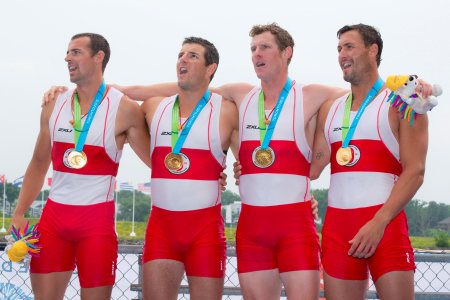 A few hours later, we were back training but with the eight this time. Although the “ocho” is not a priority boat for Canada anymore, the legacy and the history are difficult to forget. Last race of those PanAm Games for rowing, we wanted to have “Ô Canada” echoing on the course one more time. This all race became a matter of pride especially with our “best enemies”: the USA. Our heat was solid but nothing special and it took us 1000m to push away from the American crew. We wanted to be clear in this final: This is the Canadian Eight and this is our House! No mercy in this first 500m under a very strong headwind, we went off the blocks full of energy. 250m in and the US boat was already half a length behind. When our coxswain, Jacob, called “we have a length on the US”, we pushed for another half. This was all about making sure that no one was going to race for gold except us. What a team effort. We crossed the line with a bit more than 3 seconds over Argentina stealing silver to the American on the line.
We were so happy to win the men’s eight, in Canada, in front of our families, friends, fans,... . This is what it was about. One team, one country, one pride. Celebration with crowd was very special and those Games were a great example of how much support helps performing. 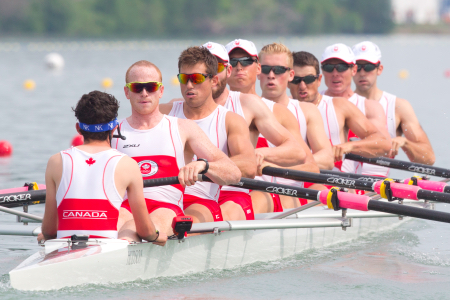 8 Gold , 1 Silver and 2 Bronze medals. This is how the Canadian team ended those Home Games. Best result ever at the Panam Games for our sport.
However the main goal remains World Championships in Aiguebelette, France in September. We are back in Victoria for a few days to empty our bags, do some laundry and pack up again for Guelph, Ontario where we will have our summer training camp leading us to France. 8 qualifying spots in the Men’s quadruple scull. This is our only focus now. 44 days..Tic Tac.

“The adventure goes on”