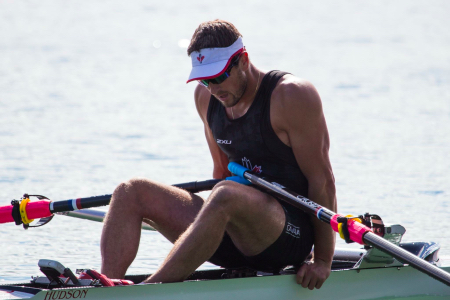 It has been a month and a half now that we are back on the water. It was hard to get back on track. I went through some tough moments late September and I cannot tell you how hard it was to just push off the dock and to be motivated for the National Rowing Championships in single scull. Two weeks off were not enough to heal after such a disappointment at World Championships. Let alone being at the start of a championship and get the machine running to hurt myself deep into a race. But we kept our heads up and we attacked this regatta, early October, ready to prove that we could deliver some good speed. It was a real battle on the water and the uncontested leader of the past 2 years, Rob Gibson, led the race and won in a stunning 6min50. I claimed the bronze medal a bit more than 3 seconds behind with Will Dean taking silver. We managed to keep a high standard of competition between us and we performed at a high level recording some very fast times on the 1999 World Championships course. However, a couple weeks after Aiguebelette, the upcoming season was not very clear to us and we still had to regroup in order to tackle our mission: qualify the men’s quadruple scull.

Back from Saint Catharines, we hit the road with the scullers. We went to the Rockies, in a small town named Golden, to kick off the new season and spend some time together out of the rowing environment. Jake Weztel (2008 Gold medallist with the Canadian men’s eight) organized a real expedition and he welcomed us at his place in this nice little town in the foothills of Kicking Horse ski tracks. It was a hike worthy of the Cliffhanger movie. An orienteering at 2800m in fresh snow. Our goal: to go from Point A to Point B in a day with a map, a compass and an emergency radio. 9 hours of effort, 18km and almost 2000m of ascent in total. We had to create our own route in an environment where only bears and other wild animals dare to go. It was a great opportunity to work as a team in such a breathtaking and hostile environment. We learnt a lot about our weaknesses and our strength as a team. To be transposed to rowing without a doubt. 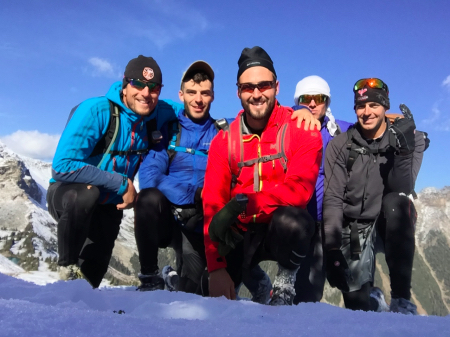 The beginning of the season was also an opportunity to talk within the team. We are facing a great challenge: to qualify a boat for the Olympic Games in May at the “last chance” regatta in Luzern, Switzerland. With the coaches, we have analysed the past season and we have identified what went well and what went wrong. Our strength and our weaknesses. Based on this, some changes were made. The training program is slightly modified to allow more long rows in quadruple scull and double scull. The sculling squad is composed of 6 rowers reinforced by the development squad to get some good battles on the water in doubles and quads. We also have a new coach for the coming few months. Terry Paul takes over from Howie Campbell who still coaches on a daily basis the development squad alongside us. All those changes, and more, are refreshing. We are highly motivated and we know that we are able to produce some speed. Enough speed to play with the best. I do believe that this tough situation can turn out to be for the best. If we would have qualified, would we have looked at the problem the same way? We would not have seen the forest for the trees. It is a hard pill to swallow but if we stand on our feet at the end, the best will be ours.
Soon, we will be on our way to Los Angeles, California from November 28th until December 12th for a two weeks cycling camp.

“The adventure goes on”