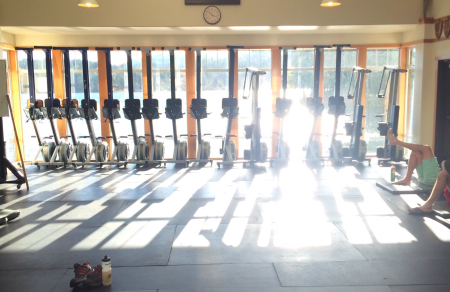 It's been a long time since I gave news from my training. The program is really intense and moments of rest are rare and precious.

We came back from California at the end of November after 15 days of an intense training camp. 40 hours of training per week and everyday was a challenge. A normal day was basically 4-5 hours of cycling (around 100km) climbing up and down 2000m of the Malibu « Hills ». Then 2 hours of weights before jumping on the ergometer for 1 hour or sometimes more.

Unfortunately, I hurt my back after a few days and I was forced to stop cycling and erging. That left very few options : swimming. I love swimming so much (irony) ! So I swam for hours in an indoor pool. I was so done with swimming. Even if I didn't enjoy the swimming part, I want to thank the Conejo Valley YMCA for welcoming us every day and making my cross training camp a success.
We stayed almost 3 weeks out of the boat to get our engines bigger. Back in Victoria, I was able to go back to full training again. I have to say that my back is what I have to focus on this year. I spend much more time sitting on the boat and on the rowing machine and the core sessions we are doing make my body reacting differently. I have to adapt and to get used to it. Everything is about mobility and especially hip mobility. So I learn to use new muscles which is a big challenge. I have to think of how I want to bend my leg. So sometimes I wake up and I can't get out of bed because I am simply blocked. One muscle decided that it worked too much than it was used to. It can be quite scary and a bit tough psychologically.
Nevertheless I can already see some positive results to those changes. Physiological testings prove that my engine is getting more efficient and the last tests we did on the water and on the erg were good.
I had to get used to a new test on the erg (rowing machine) here in Canada. The « famous » 6k erg test. What is that ? It is a big thing here in North America and it basically shows your level of fitness (aerobie) on a long distance as we did in France with our 6km time trials in single scull in the winter. You simply have to go as fast as you can on this 6k. It lasts less than 20 minutes and you give everything you have in the tank !
When I arrived on the team, I was asked : « what's your 6k ? ». The only reference I had was the only one I had ever done in September 2013 to qualify for the French Eight to go to the Head of The Charles. After a year off and a row across the Atlantic, I struggled to pull a 19min10. This was not the best reference ! But hours on the erg doing 3 or 4x6k at low rating helped me to simply get better at it and also more confident about the distance and the type of effort I was going to face. One big difference with France : here we don't taper before erg tests. We do that in the training program which makes it different and I have to learn to race tired. Impressive what the body can do !
Early November, before California camp, I did a solid 18'39 (1'33''3 /500m) as a first mark. Clearly better than September 2013.
The last week before Christmas « Break » is made of a serie of tests on the boat and on the erg. It started last week end with two 6k erg tests. A Rowperfect test at rate 24 on Saturday and an open rate test on the Concept2. I did 2 very good performances. 18'12 (1'31/500m) on the Rowperfect and an excellent 18'26 (1'32''2/500m) on the Concept2. 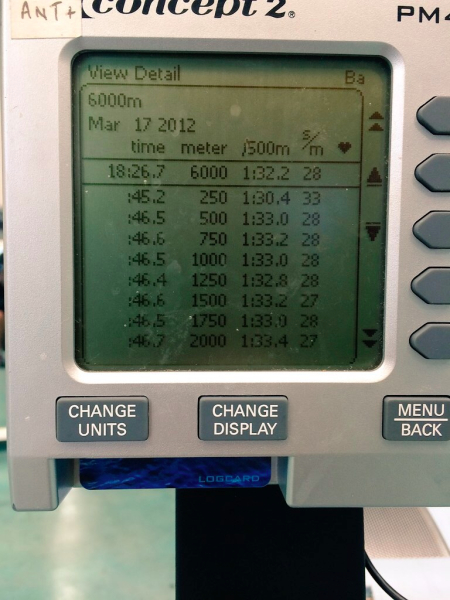 First time ever that I feel that well and « fresh » at the halfway mark of an erg test. I went 10 seconds faster in the 2nd 3000m than in the 1st one. I will have to confirm these good scores on my 2k erg test on the 4th of January. I've never been under 5'50 so this is clearly my target now.
The rest of the week is scattered with physiological testings and a time trial in single scull in Shawnigan on Saturday 20th.

I look forward to flying home for Christmas to spend that very special moment of the year with my family. I wish you all a Merry Christmas.