My 1st National Championships in Canada

My 1st National Rowing Championships were a completely new experience for me.

Technically speaking, these are what we called « Championnats Bateaux Courts » in France (Short Boat Nationals). Being crowned as the fastest single sculler has always been a big deal for me in France. Why is that ? Because those french nationals in April in the South West of France were the climax of a process of selection for the national team. Sometimes it was the only way to get into the national team and to get a spot in a boat. It felt to me that after World Championships, Cazaubon was the 2nd biggest event of my season. The training program was made to be good and fit in April.
So it was a big change for me here in Victoria. « Short Boat Nationals » in November after 2 months of training. No taper. Erg tests and physiological testing in the previous days. We even trained in between races. It clearly meant that the goal was not NRC as the main event of the year ! The biggest difference with France: everyone (almost) raced in single scull. Sweep rowers, scullers, juniors, U23, elite,... everyone was sculling. That made the field a lot more competitive and every race was a challenge to go to the next stage.

I have sometimes raced tired but I have never raced that tired ! I had to find deep inside me the power to go again, stroke after stroke but also to be more efficient.
Same as in France, we had a time trial on the Friday morning. I had a good piece and won it by more that 6 seconds. For the record, since 2006 I have always won the time trial in single scull at Nationals. It started well from my point of view. But I also learnt in the last few weeks that my teammates are competitors, tough to beat and willing to go catch you if you are a bit too far ahead. So those 6 seconds meant that I was going to be the guy to beat.
On Friday afternoon, no rest. We trained. 3x6k on the erg, side-by-side as every Friday afternoon. I came home knackered.

We had two races on Saturday with the quarter final and the semifinal. In ¼ final, I had Rob Gibson, the winner-to-be. It was not a dog fight but we pushed each other.
In the afternoon, I had to race Pascal Lussier, my Quebec fellow who came 2nd at the time trial. Once again, we had to race hard or at least harder than what I was used to do in France where going to the final was usually no big deal. I felt so bad on that semifinal. Warm-up was a fight against myself. I went on the water doubting my ability to give the 1st stroke of the race. I felt terrible. But my teammates had the same training program and we all felt tired when we gave our stern to the boat holders on the start line. I rowed in a more relax way as I couldn't really use strength. I had a solid race just focusing on my technique. But I felt that I lost some ammunitions in the battle. I went home and put my legs in a cold bath for 15min, ate and went to bed at 9pm hoping that I would recover before 2pm the next day.

On Sunday, I paddled to the start with the will to win. I forgot my sore muscles and the previous days of racing and training. I went there to put my bowball 1st on the finish line. I knew that my teammates were not going to let it go nor make it easy for me. Even if 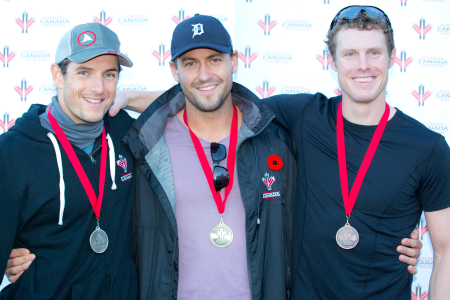 my brain was a 100% focused, I have to say that my body didn't respond the way I expected it to do. I sculled not as good as usual in the 1st 500m and even if I took the lead, my rhythm was not there. I focused on Will Dean who I thought was the man-to-beat on that day but I forgot that everyone was going to go for it. And at that game, Rob Gibson was clearly the best. He flew away in the 2nd 500m. I thought I would catch up on him stroke-by-stroke but I never did. He crossed the line with more than 3 seconds on me. Congrats chap. 2nd, 3rd and 4th place were really close. Not my best race ever but I gave everything I had to give on that day. No regret. It shows that the team is highly competitive and I learnt a lot about myself during those 3 days. I played it the way I raced in France but if I had to do it again, I would raced differently in those conditions. Moral of that story ? No need to win every single race...just one matters in the end !

Many thanks to all the volonteers, to the organizing committee and to all who made that event a success.

On Wednesday, we are going on training camp in California next to Los Angeles. 15 days of cycling, erging and weightlifting under the west coast's sun !

Full results of the WE on : RegattaCentral