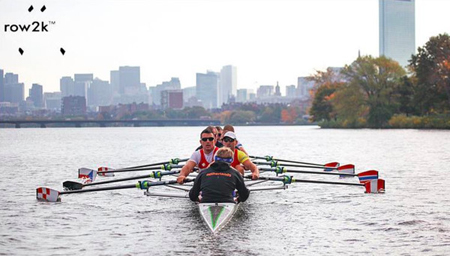 When I was asked in August to be part of the Great 8, my first thought was « Are you sure you called the right person ? ».

Few years ago I thought it must be so cool to be part of a crew gathering the best scullers in the world. Rowing single scull on and off since 2010 allowed me to get to know those guys, to discover the very special and VIP world that is theirs. There is a real comradery spirit and they are actually good friends.
My results in 2014 in single scull and our victory in the pair at Henley Royal Regatta with Mitchel Steenman opened a door into this world.
So when they called me and said « we would like to have a you for the Head Of Charles », I straight said « YES » (after checking with the canadian team if I could go !).
And here I am now in Boston for the 2014 Head of the Charles as a crew member of the « Great 8 ». It is a very special year as it is the 50th anniversary of this world-known regatta, the biggest rowing event.
The line-up for our eight is : M.Sinkovic (8) - V.Sinkovic (7) - O.Synek (6) - O.Tufte (5) - M.Drysdale (4) - R.Braas (3) - J.Bahain (2) - J.Graves (1) - P.Wiersum (c)
We are having a really good time sharing rowing experience, « after party » stories, lifestyle and training programs. We have fun and no pressure.
We took our first strokes in our brand new Hudson hull. Incredible how much power we are able to generate ! The main challenge is to be able to make something together out of this power. 8 scullers from different countries trying to do the same thing in 2 days ! But things went pretty well and the boat is moving fast. It is going to be really exciting to race on Sunday.
Our main competition will be :
- the US team Eight, 4th at the last world championships in Amsterdam.
- The french Eight that I know quite well. Those guys came 5th in Amsterdam in August.
- The Harvard Eight 2nd last year on the Charles River and they will race in front of their homecrowd.
- The Great Sweep Eight... coming here with the same purpose. Gathering the best sweep rowers in the world in the same race and race the fastest they can.

And just to have more fun, our eight is going to race small boats on saturday (Double scull and single scull). A good warm up to get ready for Sunday racing which is our top priority.