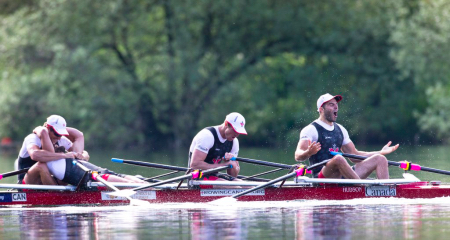 I would like to start this post by saying “thanks”. I have never felt that much support in my entire career and I am happy to be sharing this result with you. We can finally dream of Rio together. The four rowers on the picture would not be there without a rock solid support of dozens and dozens of people. So I am not going to start a list that would not be complete, as I would probably forget someone. However, a special shout out is required. Since September, our 4x (quadruple scull) is actually a 5x.

We are five rowers on this boat. We punched a ticket for Rio together with Matt Buie. We have sweat together, cried together, laughed together, bled together. Countless of hours spent in the shadow to create 5min42 of a race and I am proud to be your teammate in those moments. Without you, Matt, none of this would be possible today. And I believe it. We have a great summer in front of us buddy.
Another shout out to our coach, Terry Paul who brought us back from the ashes. “The Dark days are over” as he likes to say but once more he proved to be the man of the situation creating an environment where we could rally, perform and fight the odds and the demons. And finally a shout out to Jake Wetzel who came into our project after everything collapsed in France in September. It started in Golden in the Rockies where we fought the mountains as a unit and a team and you have been there ever since sharing your experience and touching base to make sure that we aim the right target. The “Quadmission” was born.

While writing this, I can’t help thinking how details make such a difference and can change radically the outcome. This regatta is nothing like I have ever raced. Sitting at the start line in Lucerne, a lake that I like with so many good memories, on a Tuesday evening. Dead silent. No one on the diving board. The only spectators are the Swiss cows that are more keen on looking at the trains passing by. And I looked behind me at the finish line, 2km away and you think that in less than 6 minutes it is going to be over. Good or bad. I suddenly realized that there was no tomorrow unless I create it right now. The only “next” is the one we are going to create. It all comes down to who wants it more. That’s where experience kicks in. Focus on the action. On the first stroke. On my steering. On my calls. On my capacity to read the race. On my training to back up the guy in front of me. I can control this and I can act. I couldn’t say it better than Will Dean “We spent a lot of time trying to just focus on the process of what we are doing and not the result. And it’s not until after it’s over that you realize what you’ve done”.
Of course, the story could have been different. After a tough start against the Russians in our heat where we forgot to race our race, we had the strength as a team to rally and move on. The repechage was the key to our success. We went back to our basic line. Simple stroke. No pressure, autopilot and our rhythm. We needed it to build a solid and healthy final.

In the end, we took the second place in the final behind an incredible Russian crew who might soon be able to challenge the men’s eight and ahead of a deserving New Zealand crew. We can now dream further while keeping what makes us strong: action.
We stay in Switzerland to race the world cup. People might wonder why we race again two days later in a major event like this. Well, I can’t stress enough how valuable it was to race the Russians and the Italians in Varese in April. It played a massive role in our lead up to the final at the qualification regatta. It is the last opportunity for us to race our competitors before Rio and almost everyone will be here. Where are we against the world and Olympic champion from Germany? No pressure, new goals to set, a race-after-race approach. This is what we like.

Then we are back in Canada where we will prepare for the Games until August. I am looking forward to go back to my wife and my 3 weeks old daughter who is getting bigger everyday. A nice story to tell her in a few years...
“The adventure goes on...” 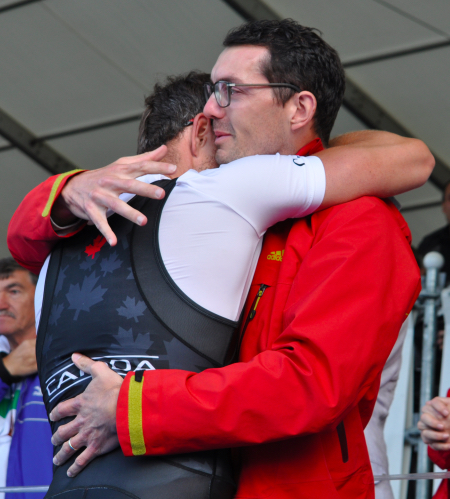 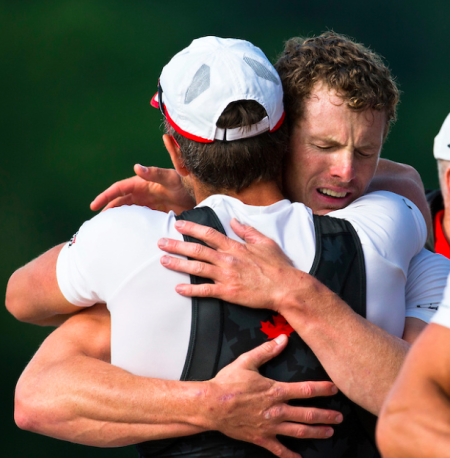 Cédric Berrest after the race