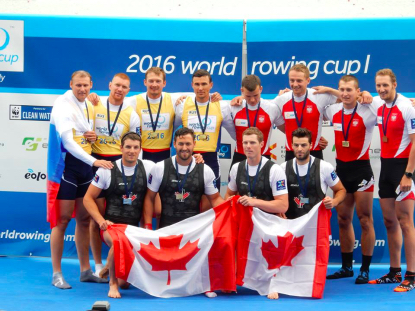 We are back in Victoria after 3 weeks of intense racing. It all started with Piediluco, followed by a weekend of racing each other (Canadian crews) in Corgeno before World Cup 1 in Varese. Only 7 boats entered this world cup, however it was the perfect field to assess our current situation. We raced the Lithuanians in Piediluco (6th last year at world Championships) and we had the opportunity to race in Varese the Estonians and the Polish 3rd and 7th in 2015. But the most interesting part was to be able to race some non qualified crews to see where we are at. Russia, Norway and Italy were part of the 7 boats. A good test, 5 weeks before the qualification regatta.

This weekend of racing showed that non-qualified crews are fit and ready to race. Is it the timing or the training program leading to Lucerne? Or is it a reflection of how “desperate” to qualify these crews are? Some were caught off-guard and some caught off-guard.
In our event, non-qualified crews claimed gold and silver. The fight between the Russians and us was fierce. Coached by the legendary and former Canadian coach, Mike Spracklen, we knew that the 1st 500m was going to be their playground. This is exactly what happened. Despite a rocket start, in a strong headwind, we were not able to get the better on them and they kept their length lead until the finish line. Even though we tried, it was the same result as in the heat two days earlier. The battle for first place created a gap with the rest of the field. The Polish claimed bronze ahead of Estonia.
We left Europe with enough information on how we are doing at the moment. We are on track for the Olympic qualification. But there are two spots left and USA and New-Zealand, two big challengers, were not part of these competitions. Still some work to do!
We know we can be better. Rob Gibson, who was injured, came back in the boat a week ago. Nothing can be perfect but we know that the coming 5 weeks are going to be a subtle mix between “intensity” to make some gains and “building on experience” to keep it steady.
Spirit is high and we have a clear indication that our current speed is a good thing for later in the season. Now...we have to qualify that boat...