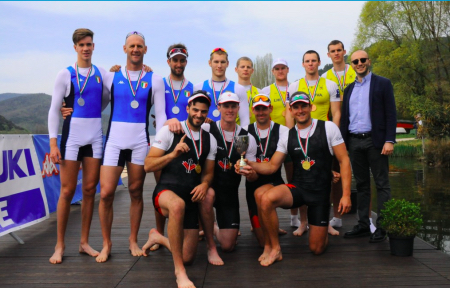 Here is a quick report of a busy Italian weekend. We arrived in Rome on Tuesday after what looked like a world discovery tour (Victoria => Vancouver => Calgary => Frankfurt => Rome => Terni). The main goal was to get used as quick as possible to the time change (+9h). It is a new experience for me as I was used to race most of the main regattas in Europe. I have always wondered how our Australia and New Zealand fellows manage to deal with the jetlag in such a short period of time before a regatta. The answer is pretty simple: “Take the bull by the horns”. We have to be back in our routine straight away. An athlete body has such an incredible biological clock that stimulating it with a classic routine “Meal-session-meal-nap-session-meal-sleep” is the key to a successful adaptation. But it doesn’t prevent me from waking up wide-awake at 3pm or to uncontrollably fall asleep on the shuttle to the course. It is without saying that I was not at my best on Friday morning to tackle the first race. But it is impressive and highly motivating to see my crewmates’ determination for whom it is just normal. They would tell you that it is just another regatta in Europe. It is humbling. True performance is the one you create. Not the one you dream.
There would have been nothing better than to begin with the Lithuanians in our heat. It is what happened. 6th at last year world championship, qualified for Rio, they sent us to the repechage at those very world championships in France.
It is full of determination and ready to put together the work we have been doing with our coach Terry that we started this race. We won it. They must have slept well because the next morning, they took their revenge in the final. A good fight, stroke for stroke that we lost on the line for 70 hundredth of a second. The Italians, one of our rivals for the Olympic qualification, took the bronze.
Piediluco regatta is a special format because there are two regattas in one. Heat/Final on Friday/Saturday and Heat/Final on Saturday/Sunday. So we barely had time to recover from this final that we had to go back on the water to race a heat against:.... Lithuania again! In a race with three boats (two through), it was most likely that someone was going to take it easy somewhere. With a gold medal around the neck a couple hours before, the Lithuanians’ race plan was probably to take it easy and race for 2nd. We won without any problem but we knew that Round 4 was going to be about who can win a final.
When I woke up on this sunny Sunday morning, I felt rested and had, for the first time since we arrived, a full night sleep. Same players play again. Lithuania-Italy1-Canada-Italy2-Denmark. Same routine, we start to know each other’s warm-up plan. This time, we decided to start a little bit faster. We did it well and took the lead with Lithuania half a length behind. However, Italy had the very same idea. And there began a battle stroke for stroke. I am at bow seat (the one who sees the three other rowers) and my role is to read the race and make the calls accordingly. The tower control in short. In such a duel, I had to make the right calls and not misfire. We won by a small margin. A victory makes you feel good but we all know where is the goal. This regatta was a great opportunity to test ourselves and get ready for the next one. We are on our way to Varese (Milan) where we will race the first world cup in a couple of weeks.