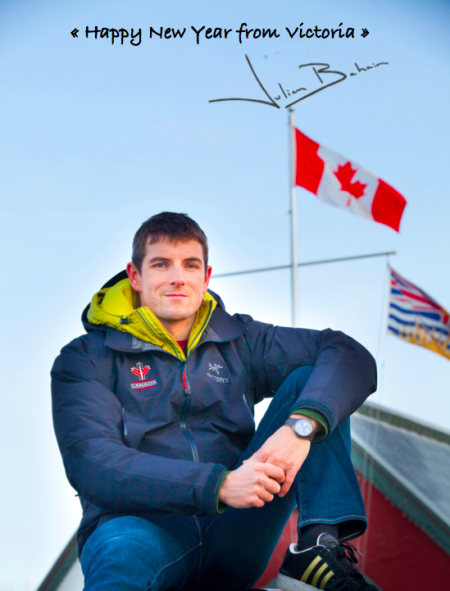 I wish you all a happy 2016 full of happiness and success. 2016 will be full of challenges and surprises. Of course it is an Olympic year and everyone has Rio in mind. But 2016 will be a qualification year at first. In 2008, I was excited to imagine my first Olympic Games. In 2012, I thought too much about the Olympic Games. And in 2016,...well, my imagination does not go further than May 25th and the Luzern Qualification Regatta. Do not ask me the exact dates of the Games. I have no idea. Nevertheless, it remains the main and ultimate goal.

This New Year will start with a series of training camps in Sacramento, California where we will row a lot in quadruple scull. Mileage and mileage. That is on the menu for 2016. Creating habits and reflex in a quad. 2015 was a real physical hurdle to go over with a surgery in February that jeopardizes my racing season and a radical change in terms of training program and location. However, I am very optimistic for 2016. I am doing great so far. I have done the full program except for a few days when I was sick. Health remains the number 1 wish and my New Year’s resolutions are along this line. Rehab, treatment, core. If my back is fine, everything is fine.

From a personal perspective, 2016 will be a year of novelty and new challenges. My wife and I are expecting a baby and we are really happy and excited. The due date is... May 24th! I have to admit that at that time, Olympic qualification at the world championships was part of the plan. But baby can decide to arrive early or late or on time. So no need to build castles in the air. It gives me one more reason to qualify and take baby on his first holidays to Rio.
2016 will also be the start of a new quadrennial and it is not very clear to me what is next. Rio 2016 seems far away. So let’s talk later about Tokyo 2020!
Bye 2015.
“The adventure goes on...in 2016”.